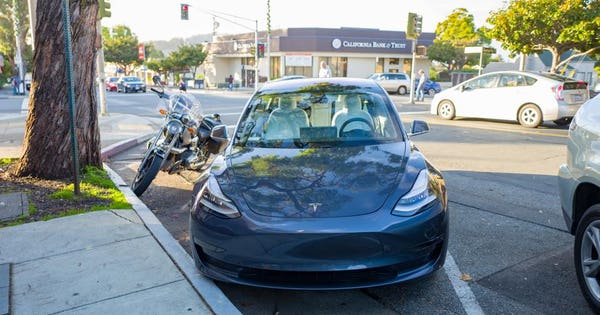 Tesla Model 3 automobile parked next to a motorcycle along Solano Avenue in Berkeley, California, December 18, 2018.Getty

With Tesla’s announcement that it finally will begin selling Model 3s at the $35,000, as promised, the west coast maker of battery-powered vehicles enters a new phase of vigorous competition and even more questions about its survival.

The automaker’s Model 3 achievement would be better news if Tesla also wasn’t forced to use $920 million cash instead of stock to repay a series of convertible bonds that came due last week. Tesla also announced that it was closing all of its stores, doing away with test drives and would begin selling vehicles on line, an abrupt operational shift designed to save money. Adding further to the non-stop drama surrounding almost everything the automaker does, federal safety officials have initiated a probe into the reasons for two recent fatal crashes of Tesla vehicles.

FILE – In this March 23, 2018, file photo provided by KTVU, emergency personnel work at the scene where a Tesla electric SUV crashed into a barrier on U.S. Highway 101 in Mountain View, Calif. Federal investigators say the Tesla using the company’s semi-autonomous driving system accelerated just before crashing into a California freeway barrier, killing its driver. The National Transportation Safety Board issued a preliminary report on the crash on Thursday, June 7. (KTVU via AP, File)ASSOCIATED PRESS

The company has cut prices on its Model 3, suggesting to some that they’re not selling as briskly as Tesla had projected.  Others analogize price cuts in the computer industry as simply a norm of doing business.

“My theory is the orders have been significantly lower than expected for Model 3 in Europe and China and do not look as promising as expected going forward,” wrote Donn Bailey, an independent analyst who publishes his view on the investor website Seeking Alpha.

Tesla’s latest competitor, Polestar 2 – a Sino-Swedish creation from Volvo and its corporate parent, Geely – is being unveiled this week at the Geneva Auto Show, with similar size and performance as the Model 3 and starting at about $45,000.  Polestar’s ambitions is more modest than Tesla’s; it aspires to sell in the tens of thousands compared to Tesla’s hundreds of thousands.

Polestar is the latest battery powered EV from Volvo and Geely.Polestar

Like Tesla’s Model S and Model X, Polestar intends to stay on the premium side of the market.  Model 3 is Tesla’s bid to make EVs a mass market vehicle, a move some analysts question as lacking a profit potential.

General Motors Co. has been selling the Chevrolet Bolt EV, a well-reviewed car that starts at about $37,000 and Nissan the Leaf, likewise well regarded, from about $30,000. Sales of these mass-market EVs are modest.

Unfortunately for automakers, demand for EVs remains exceptionally low, though fast growing. Most mainstream consumers have heard the rationales for buying EVs and aren’t interested or can’t afford the premium price.  Last year, EV sales accounted for about 1.4% of the new-vehicle sales of 17.3 million in the U.S., up 117% from the previous year.

If the current growth rate were to continue for years mass-market EVs would be a viable business. For the moment, EVs are an interesting technology but a loser financially.  Automakers are building them because governments worldwide, starting with California, basically have a gun pointed at the industry with tough regulations that require a certain number of zero-free emission sales.

Audi, BMW, Mercedes-Benz and Cadillac are the brands that either are poised or planning to sell luxury EVs – probably initially in fairly small numbers.

Which leaves Tesla in first place as the most successful manufacturer of EVs in the world for the time being.  But the company’s up-and-down finances, its fraught relationship with the Securities and Exchange Commission possibly hindering its ability to raise capital and the prospect of rising competition are clear and present roadblocks to sustainability.  This wouldn’t be the first time warning lights have flashed red:  Tesla has bounced back again and again from serious safety, financial, manufacturing and legal difficulties.

A Tesla bankruptcy isn’t out of the question – though in the event of a financial crisis it can’t resolve, a forced sale to another automaker is more likely, one that could take the brand to a new level with fresh financing, a conventional distribution network and improved business practices.