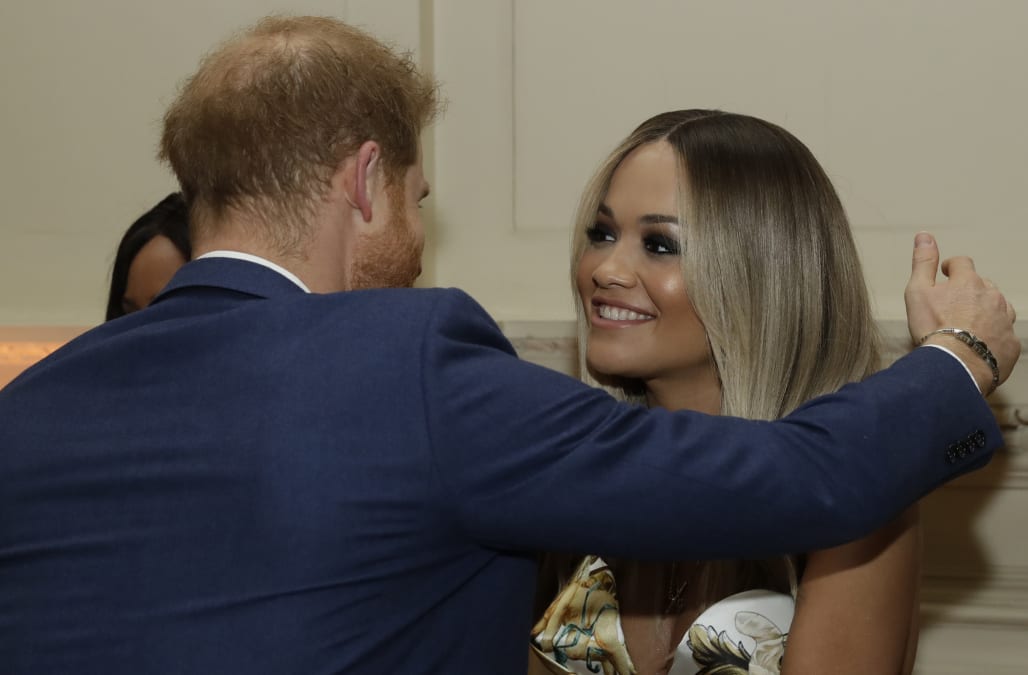 Helen Mirren and Liam Neeson mingled at the relaunch of the Mandarin Oriental Hyde Park hotel in London this week, over three decades after their five-year relationship.

SEE ALSO: All of the stars at Los Angeles Pride 2019

Another one of our favorite celebrity interactions this week came when Prince Harry attended the Sentebale Audi Concert for charity at Hampton Court Palace in London, where he shared a laugh and hugged British pop star, Rita Ora.

Other celebrity sightings this week came from Los Angeles Pride, where Lisa Vandeprump and Laverne Cox were among the star-studded crowd, the “Toy Story 4” premiere, where Tim Allen stepped out with his family, and the 2019 Tony Awards, where “Pose” actor Billy Porter made another memorable fashion statement on the red carpet.

See the best celebrity sightings of the week below:

Prince Harry chatted with singer Rita Ora and her mom, Vera Sahatciu, during a reception before The Sentebale Audi Concert at Hampton Court Palace in London on Tuesday.

Prince Harry shared a hug with singer Rita Ora during a reception before The Sentebale Audi Concert at Hampton Court Palace in London on Tuesday.

Tyler, the Creator attended the men’s French Open final in Paris on Sunday.

Tiffany Haddish, Jamie Foxx and Nicole Scherzinger hung out together at Rosé Day L.A. presented by Corkcicle on Saturday at Saddlerock Ranch in Malibu.

“Kinky Boots” actor Billy Porter was photographed leaving The Lowell Hotel, which was rated Manhattan’s No. 1 hotel by Travel + Leisure, on Sunday night to head to the Tony Awards.

Kate Bosworth attended the launch of Missoma’s new Momposina Collection at Her Name Was Carmen in New York City on Tuesday night.

Diane Kruger and Winnie Harlow attended the launch of Montblanc’s campaign for the newly designed StarWalker writing instrument at the Lone Star Museum in Houston, Texas, on Tuesday night.

Busy Philipps and Jameela Jamil attended the first Aerie REALTreat in collaboration with Create & Cultivate at The Rolling Greens Nursery in Downtown Los Angeles over the weekend. (Photo by Rachel Murray/Getty Images for Create & Cultivate)

Jamie Foxx donned Prive Revaux’s The Floridian at the Rosé Day L.A. celebration presented by Corkcicle in Malibu over the weekend.

Christina Milian and her daughter Violet Nash were all smiles at the “Toy Story 4” premiere after-party on Tuesday night, where guests were treated to McDonald’s Happy Meals.

Drake spoke to to TV personality Doris Burke before Game 5 of the 2019 NBA Finals at Scotiabank Arena in Toronto, Canada on Monday.

Kristen Bell and Dax Shepard surprised an expectant mom with a shopping cart full of baby essentials from their line, Hello Bello, as well as a $500 Walmart gift card, while shopping at Walmart in Rogers, Arkansas, over the weekend.

Chanel Iman and Kate Bosworth attend as Missoma celebrates the launch of Momposina in NYC.

Mischa Barton attends the What Goes Around Comes Around X eBay launch in New York City.

Paris Hilton’s top-selling perfume has the best reviews: ‘This my absolute favorite fragrance of all time’

Katie Holmes stuns in custom Missoni for the 2019 Life Ball

I am busy analysing Bafana Bafana opponents during lockdown – Ntseki