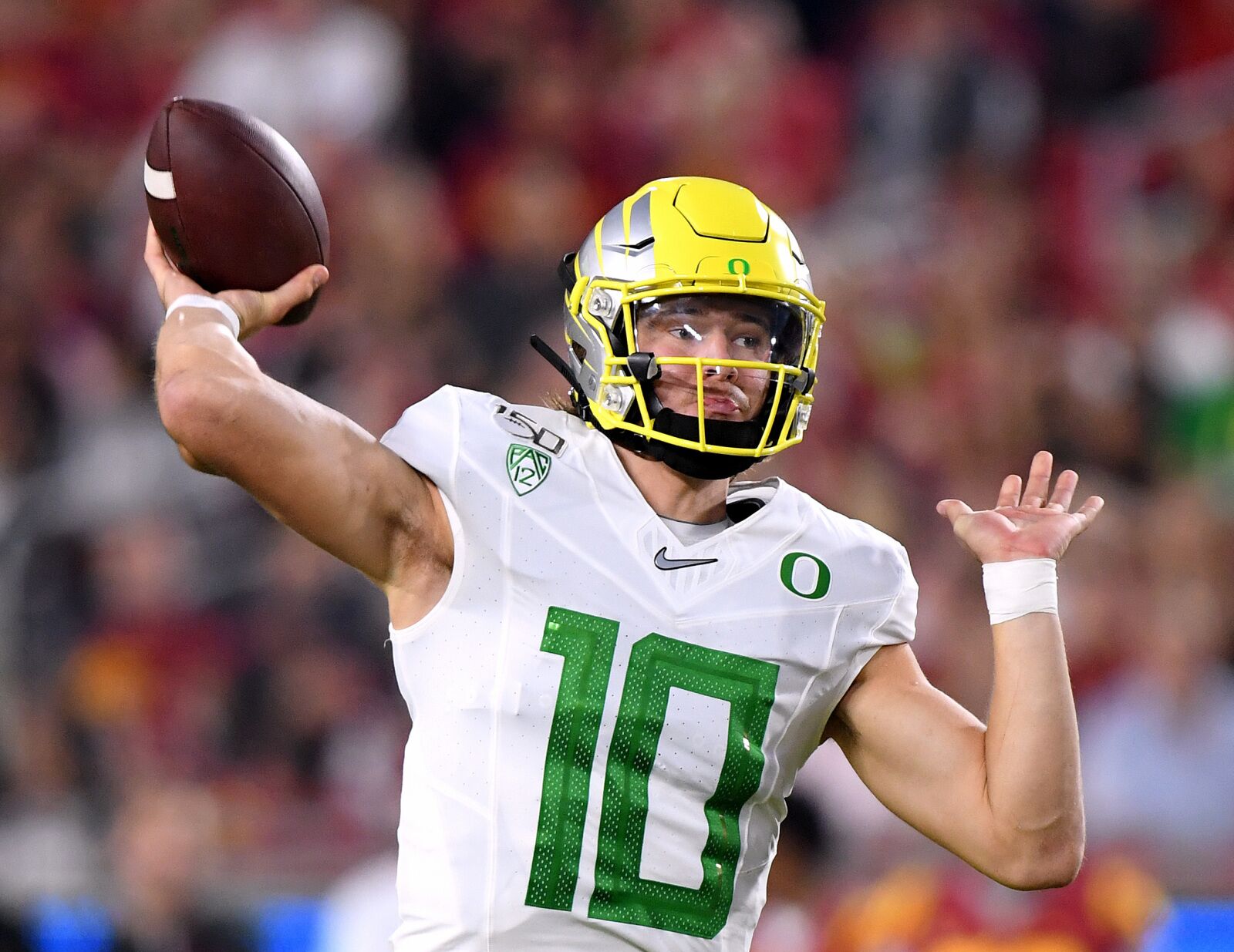 As the race for the College Football Playoff intensifies, Chris Fowler, Kirk Herbstreit, and Maria Taylor will be covering Oregon football at 4:30 PM this Saturday night in Tempe, Arizona.

Sixth-ranked Oregon football will be playing in front of the entire country when they face off with Arizona State. The Sun Devils (5-5) are in the middle of a four-game losing streak that includes a recent field-storming loss to the proud Beavers of Oregon State.

If the Devils are middling, why would ABC/ESPN choose to make Tempe, Arizona, the center of the college football world?

It might be because FOX has rights to the only top ten matchup of the weekend with Ohio State and Penn State. It might be because all of the best SEC teams are playing Western Carolina and Squahawkey Canyon Institute of Technology instead of a ninth conference game.

Whatever the reason, the Ducks have an opportunity.

The last time the nation got a “good look” at Oregon football was when they saw the Bo Nix Magic Show on August 31st. Since then, the Ducks have been buried in #Pac12AfterDark kickoffs and a noon Husky game.

They did get to shellack USC in primetime, which is looking better and better now that the Trojans are ranked #23 in the new CFP rankings, but teams like Oklahoma, Alabama, and Georgia have had many more chances to impress the nation.

As Kurt Russell once said: “Great moments are born from great opportunity.”

That’s what the Ducks have in Tempe.

Ducks fans know that they should never take a November trip down to the desert lightly, but the circumstances this weekend demand that Oregon football do more than just escape with a victory.

CFP speculation is nuts. Chaos is almost guaranteed. But I’m going to dabble in speculating anyway.

As far as I can tell, if (1) the Ducks handle their business in the Pac-12, and (2) as long as LSU beats Georgia in the SEC title game (fingers crossed), the two teams that Oregon will likely have to compare resumes with will be Oklahoma and Alabama.

Since losing to Kansas State, Oklahoma has had to squeak wins against Iowa State and Baylor. The fact that the Sooners haven’t looked dominant in those games has hurt them in the eyes of the committee.

Alabama lost Tua Tagovailoa for the rest of the season in their 38-7 win over Mississippi State. I absolutely hate to see a guy like Tua go down, especially the way that he did. But when backup QB Mac Jones took over for the Tide in the second half, they only managed to outscore the Bulldogs 3-0. I don’t think that impressed the committee very much either.

The committee is a group of human beings that react to what they see. If the Ducks look good, they’ll continue to garner favor over the less-than-impressive Sooners and Tide.

Oregon football has an opportunity this weekend to take advantage of their position at #6 and absolutely embarrass a Herm Edwards coached football team, on the road, and in front of everyone.

If the Ducks come out flat on Saturday in a close win (as ASU games have been known to go from time to time), the Bammers and Boomers will get louder.

Even a 30+ point win won’t silence the anti-Oregon campaigns. David Pollack still won’t understand that Week 1 is different from Week 12. The Paul Finebaum crowd won’t stop questioning Rob Mullens’ position as chairman of the CFP committee. College Football fans across the nation will explode over their perception of the quality of the Pac-12 conference as a whole.

If the Ducks somehow lose to the Sun Devils, the silver lining would be that we don’t have to bother worrying about all this exhausting Playoff talk anymore.

And if the Ducks lose to the proud Beavers of Oregon State in the Civil War, or drop the Pac-12 title game to (presumably) Utah, they’ll be stepping aside for the Sooners and Tide to fight it out amongst themselves. If, if, if, if.

But exhausting Playoff talk is a great problem to have, so I’m looking for a 30+ point win. Maybe 40+?

At the end of the day, the only things Oregon football can control are the things they can control. The rest of the country will say what they want, but if the Ducks handle their business, they’ll have done all they can do.

Right now, the Ducks’ business is to dominate the Devils on national TV.

Soft Food Diet: Foods to Eat and Foods to Avoid –...