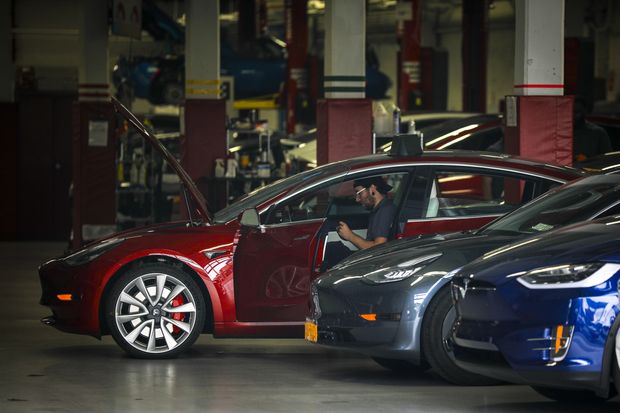 Some owners have had a Model 3 waiting three months for parts to arrive from Tesla; the service garage at a Tesla dealership in Brooklyn, N.Y., in August.

Gus Schmidt was so excited when he received his Tesla Model 3 sedan in August that he tweeted a photo of himself and his wife grinning next to the electric car. Six weeks later, the thrill was gone.

The Fort Lauderdale, Fla., resident damaged his bumper in a low-speed collision and then had to wait three months for the repair shop to get the spare parts from Tesla and fix his car.

The unusually long wait for a repair underlines a drawback of being a Tesla customer. The upstart car company has created a coveted luxury brand but is still learning some of the basics of the auto business.

Tesla has cranked up its Model 3 production in recent months, enabling buyers like Mr. Schmidt to get their vehicles after long waits. But as Tesla’s U.S. sales approach those of luxury auto makers like

and Daimler AG’s Mercedes-Benz, it has encountered new logistical problems, from delivery and servicing of a growing fleet to balancing supply and demand.

Tesla Chief Executive Elon Musk has acknowledged some of the operational challenges, saying on a recent conference call that his No. 1 priority this quarter is to improve the service of its cars.

“We’ve just been very silly about where we store our parts,” Mr. Musk said. For example, he said, Tesla was shipping spare parts from China to the U.S. and then back to customers in China. “It’s just being smarter about sending parts directly to service centers.”

Getting the logistics right is especially crucial this year given Mr. Musk has said Tesla will bring down the price of the Model 3 from its current $42,900 base sticker price to the long-promised $35,000 threshold to reach mainstream buyers.

Mr. Musk expects Tesla to deliver as many as 400,000 vehicles world-wide this year, roughly four times what it sold two years ago. Tesla began shipping Model 3s to Europe this quarter for the first time.

Tesla customers in recent months have been venting on social media about trouble getting repair appointments, long waits for those fixes and flaws in newly delivered vehicles, whether they are the paint job or cracks in windows.

In interviews, several Model 3 buyers recounted their frustration with waiting for parts to arrive at body shops. David Kim of San Jose said he is still waiting for his Model 3 to come out of the shop after a collision in September. He said he was told by Tesla’s call center a few weeks ago that the auto maker was focusing its attention on making new cars. 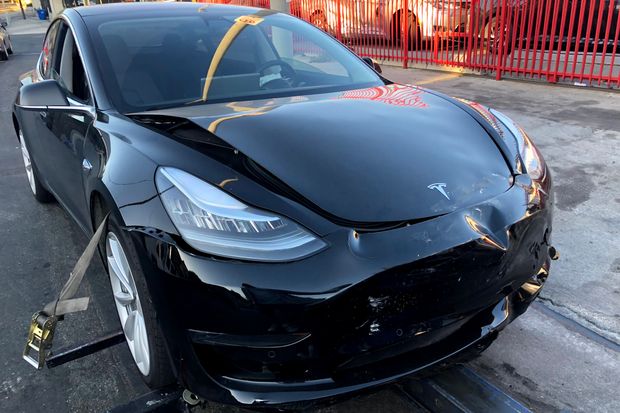 David Kim’s Tesla Model 3 was damaged in a collision last September in the Los Angeles area; he is still waiting for it to come out of the shop.

“I don’t really see any kind of loyalty from the Tesla side for its existing customers,” the 33-year-old said.

Several body-shop owners said it often takes weeks longer to get parts from Tesla than from other auto makers, whose supply chains are generally well stocked with spare parts.

Tesla said it would be inaccurate to assume it always takes weeks for repair parts to arrive. Many factors can affect how long it takes to repair a car, Tesla said, including the number of parts needed, their availability and the logistics of getting them delivered. The company said it has developed models to better forecast when parts would be needed and how they would move through its supply chain. It has also created a team dedicated to ensuring the quality provided by third-party body shops.

Part of the problem is that Tesla, unlike other auto makers, doesn’t have a network of hundreds of franchise dealerships to sell and service its vehicles. Tesla has long touted this as an advantage, giving it more control over the customer experience. But it means Tesla has to pay for service centers and to staff them.

Tesla has 85 service centers sprinkled around the U.S., according to the company. Ahead of bringing out the Model 3, it invested in mobile technician teams that could visit customers, freeing up space at its own facilities. The company estimates 80% of repairs can be done outside of service centers and plans to increase its mobile-service fleet by 24% this year.

Tesla challenged the closely watched survey, saying that its cars are the safest and best-performing vehicles available.

Mr. Musk last week said Tesla would improve its mobile repair service, announcing plans to enable its cars to request an immediate repair crew and loaner vehicle as soon as onboard sensors detect a flat tire or other failure. “This will be immense in improving customer happiness,” Mr. Musk said.

For cars that have been in collisions, however, Tesla says it has two body repair centers, both located in California, and nine that can do light collision repair. Otherwise, it sends customers to approved body shops around the country.

Mr. Musk said Tesla has erred by storing service parts at distribution warehouses rather than more locally at service centers, noting a simple repair could take days waiting for parts to arrive.

He also has said on Twitter that he wants to bring more collision work in-house. Body shops are a low-margin business and come with high costs to stock the proper equipment and hire trained staff.

“It is going to be astronomical,” Dan Brennan, who has owned a body shop in Orlando, Fla., for about 40 years, said of the costs. Mr. Brennan stopped doing Tesla work about a year ago, frustrated with waiting on the company.

Many Tesla buyers like Mr. Schmidt say they remain fans of the Model 3 despite service hassles. The 38-year-old says he has been more patient with Tesla than he would have been with his previous cars, a Toyota Prius and a BMW M3 sports sedan.

“There were certainly days during that three-month period where I was probably more frustrated than other days,” he said, “but then when you get it back it brings that joy and you forget past transgressions.”

Write to Tim Higgins at Tim.Higgins@WSJ.com