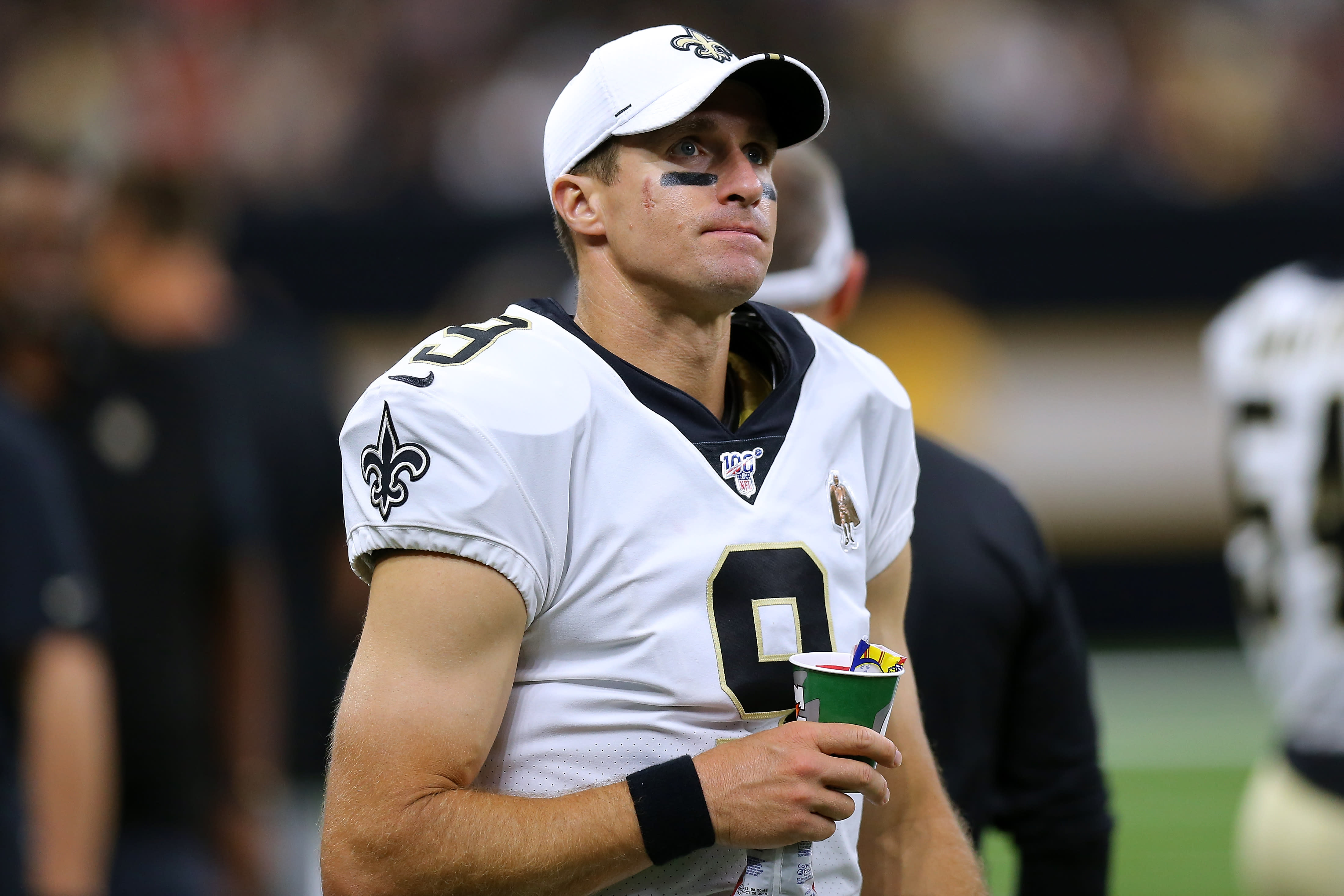 Each week the Noise highlights 10 somewhat un-obvious names whom he believes will leave egg on his face. To qualify, each player must be started in at least 50 percent of Yahoo leagues. Speaking as an accountability advocate, I will post results, whether genius or moronic, the following week using the scoring system shown here (Thresholds – QB: 18 fpts, RB: 12 fpts, WR: 11 fpts, TE: 10 fpts). If you’re a member of TEAM HUEVOS, reveal your Week 2 Lames in the comments section below.

Focusing on home/away splits is often a dangerous game due to minute sample sizes. However, in the case of Brees, it’s an influential trend, one which should be weighed considerably when making difficult lineup decisions. Take 2018, for instance. Brees was King Kong at home, tallying 321.6 yards per game, 11.1 air yards per attempt, and a 21:1 TD:INT split. However, away from the Crescent City, he morphed into a docile marmoset, averaging 217.6 yards per game, 7.0 air yards per attempt while tossing just 11 touchdowns. If not for his unpredictable four rush scores, his fantasy production would’ve dropped off to a must-bench level.

Traveling to Los Angeles, the Saints will undoubtedly be motivated to exact revenge on Nickell Robey-Coleman and the Rams after last year’s whistle swallow, but banking on Brees to post top-10 numbers is a stretch. Robey-Coleman, Aqib Talib, and Marcus Peters largely snuffed out their assignments in the opener, conceding just 0.73 yards per snap. To combat their presence and knowing LA’s continued inadequacy defending the run, a heavy 1-2 punch of Alvin Kamara and Latavius Murray is Sean Payton’s most likely strategy. Turning to Dak Prescott (at Was), Josh Allen (vs. Cle) or Ben Roethlisberger (vs. Sea) is a suggested move.

Freeman to lay another egg against Philadelphia

A popular Round 3 choice in 12-team drafts, Freeman was supposed to launch his comeback tour last week in Minnesota. Evidently, the bus blew a tire. Out of tune against the Vikings, the veteran rusher compiled a standard Yahoo league fantasy score equivalent to my I.Q. — 2.6. Coughing the pill up twice while also notching an eye-gouging 1.75 yards after contact per attempt, he essentially pulled a peak Axl Rose and failed to show up. Most disturbing, Dirk Koetter awarded bass player Ito Smith 50% of the snap share. All told, it was a flop of epic proportions.

Sure, pin the blame on the matchup or opening week jitters, but ask yourself, when was the last time Freeman was consistently effective? The correct answer is Weeks 13-17 in 2017. It feels like a bygone era. Until the rusher can steadily churn his legs downhill and amass useful yards, he’s nearly untrustworthy. Don’t dwell on past results. Focus on future gains, or in Freeman’s case, future failures.

Under the prime-time spotlight at home against Philadelphia, Freeman is an overpriced RB3 and not much more. Granted, it was against a disheveled Washington front, but the Eagles routinely plugged gaps, corralled backs, and won the trench war in the opener. ‘Skins backs totaled a laughable 28 yards on 13 attempts (2.2 ypc). With RG Chris Lindstrom on IR, Fletcher Cox and Co. storm the stage.

This knucklehead gets a gazillion predictions wrong on a week-in, week-out basis, but taking a firm stance the Colts offense wouldn’t crumble post-Andrew Luck retirement was a rare correct prognostication. Battling the Chargers on the road last week, Jacoby Brissett and Friends moved the chains steadily from start to finish, much of it coming on the ground. Mack was brilliant. On 25 attempts, he amassed 174 yards, including an impressive 63-yard sprint to the end zone. He forced just two missed tackles, but his 3.48 yards after contact per attempt supported the leg-churning power displayed. Behind a top-five run-blocking line, he should crank out occasional RB1-RB12 lines.

However, Mack’s Week 2 opponent, Tennessee, off a boot-to-the-face of Baker Mayfield, presents a unique challenge. The Titans might be the most underrated defense in the NFL. Last week in Cleveland, Daquon Jones, Sharif Finch, and Isaiah Mack held bulldozer Nick Chubb mostly in check. The trio totaled six run stops and limited the rusher to 75 yards on the ground. Obviously, the Browns offensive line is nowhere near as sturdy as Indy’s, but in enemy territory, Mack could fall outside the position’s top-20.

No Golladay on the calendar for the Lions against LAC

Ties may be acceptable in soccer, but in futbol Americano they’re the absolute dumbest. All NFL contests should determine a winner no matter how long the damn game takes. Last week’s deadlocked ending in Arizona was a prime case.

Kyler Murray’s stirring comeback, or Detroit’s mystifying collapse, dominated the headlines, and for good reason. Outside of T.J. Hockenson’s record-setting afternoon, the Lions, against an Arizona defense trotting out backups to supply its secondary, was rather tepid offensively, Golladay included. He lured an appreciable nine targets and found the end zone, but his four receptions for 42 yards and baffling 4.6 yards per target denoted a spoiled opportunity. His teammate, Marvin Jones, didn’t fare much better (4-60-0).

In the home opener, Golladay squares off against the Chargers, a club with one of the game’s best cover corners around, Casey Heyward. The DB, who surrendered a 57.4 catch percentage to the opposition last season, limited his assigned Colts receivers to three catches for 34 yards Week 1. Whether in 11- or 12-personnel, Golladay will likely line up against the stifling corner, hindering his overall Week 2 potential.

Soft tissue issues are nettlesome by nature. No matter how tough the player, they sap explosiveness, whether running fly routes or on quick-cutting slants. Last week, Diggs gutted out a hamstring injury against the Falcons. On an uncustomary 60.2% of snaps played, he was targeted twice, catching both passes for 37 yards. Kirk Cousins inexplicably tossed only 10 passes. Dalvin Cook shined. Bank on Gary Kubiak sticking to a run-first game plan this week and beyond.

Though Minnesota’s pass attempts could double or triple this week in Green Bay, the matchup is rather unfriendly. Slated to lock horns with CB Jaire Alexander, Diggs could be in for another uneventful Sunday. The Packers’ defensive backer allowed a 52.6 passer rating and 0.70 yards per snap to Chicago WRs in Week 1. Yes, Mitchell Trubisky bears much responsibility, but given Diggs’ physical limitations, he shouldn’t be considered a must-start in two-WR leagues. Rolling with Curtis Samuel (vs. TB), Michael Gallup (at Was) or John Brown (at NYG) over the Norseman isn’t a reckless move.

RB: Phillip Lindsay, Den (Chi -1.5; $16) – Discussed throughout the entire offseason, Denver is committed to a full-blown timeshare at RB. It was apparent last Monday in Oakland. Lindsay out-touched Royce Freeman 15-11, but recorded a 53.4 snap percentage. He was also outplayed by his complement, averaging 3.9 yards per carry to Royce’s 5.6. No matter what the distribution is this week, Lindsay needs to ride the pine against Chicago. The Bears D thumped Green Bay in the opener, limiting RBs to a hideous 2.2 yards per carry. Roy Robertson-Harris and Khalil Mack tallied run-stop percentages of 25.0 and 16.7, respectively. Leave Lindsay in the stable. (FF: 10-33-4-25-0, 7.8 fpts)

RB: David Johnson, Ari (Bal -13.5; $25) – Arizona’s grand “Air Raid” experiment resembled the Hindenburg through three quarters last week versus Detroit. Then a switch flipped. In a furious comeback attempt, Kyler Murray and the offense suddenly clicked, as Arizona scored 18 points in the fourth quarter to force an eventual OT tie. Johnson was nothing short of magnificent in a multi-dimensional role. On 25 touches he totaled 137 yards with a receiving TD, setting the Week 1 pace in air yards among RBs. After being lost in the desert last year, it was refreshing to see him utilized properly. The Ravens, though, are an intimidating flock. Miami is abysmal, but Baltimore lived up to its top-10 run D promise. Patrick Onwuasor alone posted a 20.0 run stop percentage. Be wary. (FF: 15-43-5-39-0, 10.7 fpts)

WR: Antonio Brown, NE (NE -18.5; $27) – The recent unsettling allegations revealed in a civil case against Brown greatly complicate his availability. It’s possible he lands on the NFL’s exempt list or is outright released. However, an appearance in Miami also remains on the table. If he does suit up, he’s entirely untrustworthy. Recall when Josh Gordon arrived in New England last fall, he, coincidentally enough against Miami, saw action on just 22.7% of the Pats’ snaps, catching a pair of passes for 32 yards. Yes, it’s Miami, a franchise dealing with a potential full-blown mutiny, but if Brown goes, expect him to be very limited. (FF: 3-43-0, 5.8 fpts)

TE: O.J. Howard, TB (Car -6.5; $17) – Talked up as one of the position’s top breakout candidates in August, Howard crawled his way to a 4-32-0 opening line against San Francisco. An elite field-stretcher blessed with flawless measurables, he, much like the Tampa offense as a whole, laughably underwhelmed. The TE’s 6.40 yards per target was indicative of how poorly Jameis Winston executed. Remaining bullish on Howard full season is recommended, but another subpar effort is likely against Carolina. The Panthers held Rams tight ends to five receptions for 27 yards. Playing a Darren Waller (vs. KC) or Mark Andrews (vs. Ari) ahead of him is strongly encouraged. (FF: 4-38-0, 5.8 fpts)

DST: Philadelphia Eagles (Phi -1.5; $12) – When your secondary concedes 380 yards, multiple touchdowns and 8.6 yards per attempt to former Broncos slough Case Keenum, smelling salts may be in order. Rasul Douglas, who accounted for two touchdowns allowed, gave up a perfect 158.3 passer rating to his assignments. Philly’s front is one of the game’s stoutest, but in a contest with a 51 over/under, it will need to throw everything and the kitchen sink at Matt Ryan to hold him at bay. With Atlanta’s line banged up, it’s possible — Ryan was pressured on 38.8% of his dropbacks last week — but unlikely. Julio Jones, Calvin Ridley

#TEAMHUEVOS PICKS OF THE WEEK

Each week one fortunate guest prognosticator will have a chance to silence the Noise. Following the rules stated above, participants are asked to submit their “Lames” (1 QB, 2 RBs, 2 WRs, 1 TE, 1 D/ST) by midnight PT Tuesdays via Twitter @YahooNoise. How large are your stones?

Want to bull rush Brad? Follow him on Twitter @YahooNoise. Also check out his TV show, “The Fantasy Football Hour,” now available in 100 million households on various regional sports networks, along with his work on the “Yahoo Sports Fantasy Podcast” and his award-nominated podcast, “The Fantasy Record.”