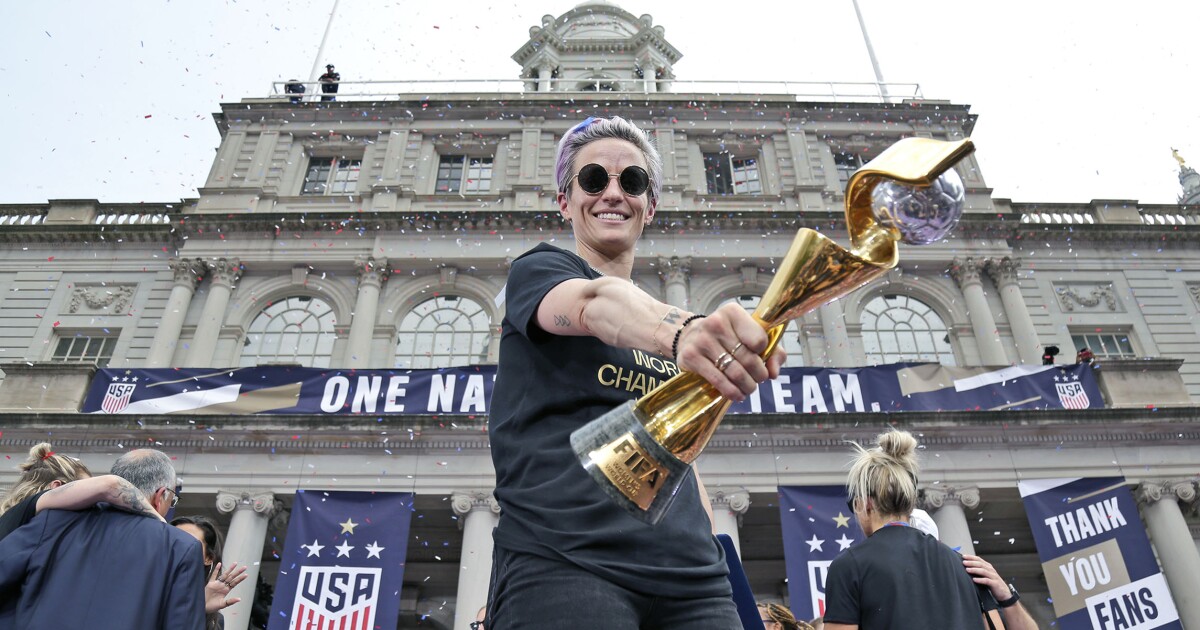 Billy Joel once said, “We didn’t start the fire, it was always burning since the world’s been turning … No we didn’t light, but we tried to fight it.” When it comes to several high-profile progressive women in politics, nothing could be further from the truth.

Take, for example, Rep. Alexandria Ocasio-Cortez, D-New York, and newfound celebrity and U.S. Women’s National Soccer Team captain Megan Rapinoe. Both young women use their massive platforms not to put out fires, but to fuel and spread the flames of outrage to the wrong terrain.

Before even winning the Women’s Soccer World Cup, Rapinoe said she was “not going to the f—ing White House,” if President Trump invited them after their potential win. Then after the final match, she watched as an American flag was dropped to the ground and ignored it to take a photo opp.

….invited Megan or the team, but I am now inviting the TEAM, win or lose. Megan should never disrespect our Country, the White House, or our Flag, especially since so much has been done for her & the team. Be proud of the Flag that you wear. The USA is doing GREAT!

Meanwhile, Ocasio-Cortez decided to invite the women’s team to Congress in opposition to President Trump’s offer. Rapinoe said she would attend Ocasio-Cortez’s event, because the soccer star is only willing to talk to people “who believe the same things [she] believes in.” Refusing an invitation to the White House and rebuking everyone who disagrees with progressive politics is not just making a political statement, it’s unpatriotic disrespect.

After all this, Rapinoe proceeded to, with arms wide open and sunglasses on, celebrate with pride “her” accomplishment, dancing onto a stage in Manhattan then making a speech, in which she said, “This is my charge to everyone: We have to be better. We have to love more. Hate less. We got to listen more and talk less.”

“This is my charge to everyone: We have to be better. We have to love more, hate less. We gotta listen more, and talk less … It’s our responsibility to make this world a better place.” pic.twitter.com/dfeQvABXJV

These comments could have been helpful, even encouraging, if she hadn’t predicated her speech with her own hateful comments, where she disrespected the current administration and all Americans. Repeatedly, Rapinoe has failed to take her own advice. She should actually love more and hate less, and most of all, listen far more than preaching about her politics and how much she deserved to win.

Sure, star athletes aren’t known for their undying meekness and timidity, and neither are politicians, but these responses by these young women are just ranting and provocative words that fuel the flames of the angst in society.

Touting ‘your’ accomplishment at the World Cup isn’t providing equal rights for women. Inviting an angry soccer player to Congress isn’t changing standards at the border. Rather than creating white noise and self-praise, these young women need to cut out the political drama and busybody behavior, and stick to the point.

Rapinoe in her win shouldn’t be exclaiming “I deserve this.” She should be treating it as an opportunity for unity and celebration, and not be excluding people with political messages that have nothing to do with the country’s victory.

Celebrating a victory or protesting is not wrong in and of itself, but we are pitted against each other by Rapinoe’s rhetoric. Instead of using entertainment as a means of escaping today’s politics, an opportunity for unity is being politicized.

It seems we’ve forgotten the coach’s old advice: “Remember your position. And be a good sport.”

Why today’s comments from Rick Hahn and Kenny Williams are a...